Trade unions today are facing new challenges with the internationalisation and regional integration of markets and production. These challenges have been particularly pronounced in Western Europe, where economic, political and monetary integration promoted under the auspices of the European Community/European Union have advanced further than in other region in the world. In the field of social policy and employment regulation, however, the authority of the European Community has historically been weak and the nation-states have remained the locus of power – offering trade unions limited opportunities to influence the integration process.

It therefore came as a great surprise when, on 31 October 1991, the main European employers' associations and trade unions – the UNICE, CEEP and ETUC – signed an agreement that almost literally was written into the Maastricht Treaty on European Union. By institutionalising a new mode of decision-making in Community social policy, the European social partners were granted a co-regulatory role in the EU legislative process whereby European agreements could replace proposed legislation and become European law.

The subject of this doctoral study is how trade unions in Western Europe – under the auspices of the ETUC, which today represents more than 50 million employees – since the mid–1980s have responded to the new pace of European integration and tried to exploit the Maastricht institutional innovations to promote further Europeanisation of labour market regulation and trade union organisation. Focus of the study is on the dynamics, constraints and outcomes of West European trade union integration and social dialogue since the early 1990s. Based on an insider study of ETUC development, the book provides detailed analyses of the interplay between national and European actors of industrial relations; the problems of coping with the diversity of interests, identities and institutions within European trade unions; the internal union struggle to arrive at shared conceptions of European integration; and an in-depth assessment of the implications of the Europeanisation of trade unions and industrial relations over the past decade. 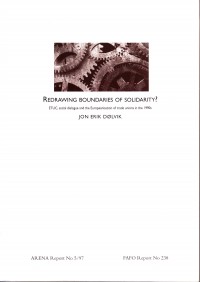