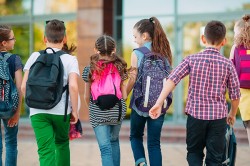 News about migration and integration

In a new article publicised in Ethnic and Racial Studies, Jon Horgen Friberg shows that youth of immigrant origin gradually adopt a stronger self-identity as Norwegians, regardless of geographical and religious backgrounds. However: While adolescents of European immigrant origin report being seen as more “Norwegian” than they identify themselves, children of immigrants from Africa and Asia are seen by others as far less “Norwegian” than how they perceive themselves.