As of January 1, 2015, the number of immigrants living in Norway totalled 669 378. People seeking employment opportunities comprised the largest group driving the growth of immigrants during the decade but immigration for the purpose of the family reunion was also an important factor. Refugee immigration has until recently remained more stable. Asylum seekers who obtain refugee status have a low return rate and several refugee groups grow over time. Refugees and family reunion immigrants experience – not surprisingly - more difficulties gaining access to employment.

Research on efforts to integrate refugees has been in focus at Fafo since the mid- 1990s. We have followed the introduction scheme from its inception as a trial project over into its implementation as official policy. In addition, we have carried out evaluations of the policy.

Our research interests are centred on the feasibility and effectiveness of different plans, as well as client participation and client experiences. We have also examined the ethical implications of the use of obligatory schemes of qualification and economic sanctions regarding a group that has few alternative sources of sustenance.

We have also completed a number of projects connected to NAV’s (Norwegian Labour and Welfare Administration) role in integration efforts, both as a partner in the introduction project and as an independent actor for whom immigrants are a steadily more important client group. In the present situation, knowledge about how to ease the influx of refugees into the labour market is more important than ever.

Universalism and equality of services are important principles for the Norwegian welfare state.  A substantial part of research on the welfare state’s services for immigrants, therefore, revolves around the ordinary range of services that is offered to the population at large. While we already have mentioned NAV, all other service areas employ ‘mainstreaming’ as an underlying principle: services should be appropriate to both immigrants and citizens such that both groups receive an equal service provision. Equality is however not a simple concept that can easily be implemented, and our research points out that realization of political goals is often difficult for first-line service providers. 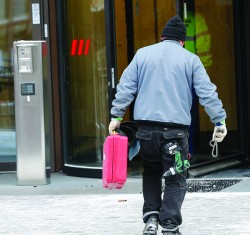 Stepping in or stepping out? Immigrant women at work in Norway , 2019
Les mer om boka / Read more at Policy Press

If work is out of sight. Activation and citizenship for new refugees Journal of European Social Policy , 2011
Nettutgave